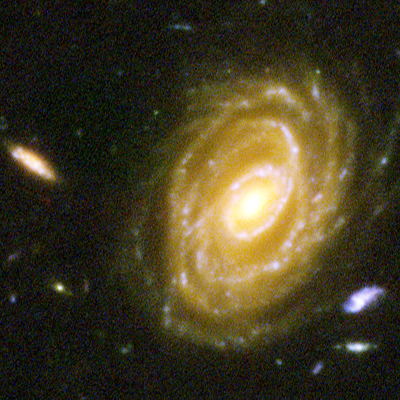 Below are links to three versions of the Ultra Deep Hubble Field that was released today (March 10, 2004). If your having trouble accessing the NASA servers, try the downloads below:

The full resolution 6200x6200 image This is a 60 meg download and won't display on your machine unless you have at least 110 megs of free RAM. We suggest you bypass this download in favor of the other two below.

This is a 1550x1550 version of the image at 100% quality Its a 3.4 meg file and should display in most browsers. It captures all the features of the full resolution display.

Within the Hubble Ultra Deep Field there are approximately 10,000 discrete objects. The total field of view represents only 1 ten millionth of the total sky. Most of these objects are very small and likely have masses in the range of 105 to 107 solar masses. Note the mass of the Milky Way galaxy is 1012 solar masses.

Thus, many of these objects are pre-galactic size lumps of material which are merging together to form larger galaxies. In this sense, this image is very much like looking back to our origins. Before there can be life, first nature must assemble matter in discrete units that we call galaxies.

The different colors of the objects represent how they appear to us on earth. Those colors do not necessarily reflect the intrinsic color of the object as many of these objects are greatly redshifted. The likely average redshift of a small object in this field is 3-5, and thus we are seeing rest frame ultraviolet emission, redshifted into the Hubble filter set.

There are also examples of fully formed galaxies (i.e. regular spiral pattern). These are most likely galaxies at a redshift of about 1. But there are plenty of chaotic and odd looking objects and as you scroll through pixels you will see more and more diversity in the various morphologies. You will also see lots of clumps of individual objects which look like they are merging into a single object. This supplies strong evidence that galaxies are formed via the gravitional merging of sub clumps.

Finally, for you cosmologists/experts out there

this ultra deep field is quite consistent with what was seen in the original Hubble Deep Field in the sense that the angular size distribution objects is overwhelmed by small angular size objects. Remember, in cosmology there is a minimum redshift in the angular size diameter (somewhere between 2 and 3 for reasonable cosmologies), so high redshift objects (z > 5) don't necessarily have small angular diameters. Thus, the great preponderance of small angular size objects in this field is challenging to understand. Also note that there are some diffuse/ low surface brightness objects in this field. These may very well be normal galaxies at relatively high redshift and thus we are seeing the (1+z)4 cosmological dimming.

Have fun scrolling through the pixels.