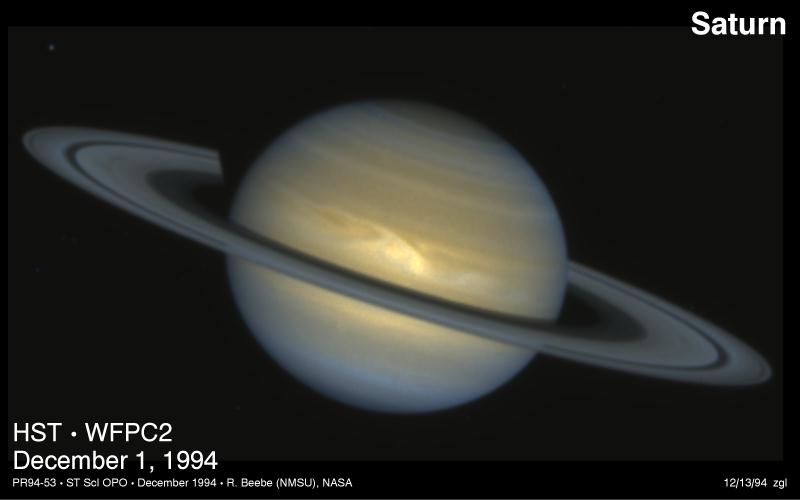 Saturn is the sixth planet from the Sun and is the second largest in the solar system with an equatorial diameter of 119,300 kilometers. Much of what is known about the planet is due to the Voyager explorations in 1980-81. Its day is 10 hours, 39 minutes long, and at a distance of 9.5 A.U.'s it takes 29.5 Earth years to revolve about the Sun.

Saturn is 95 Earth masses and has a radius of 4.6 Earth radii. The atmosphere is primarily composed of hydrogen (94%) with small amounts of helium (6%) and methane. Saturn is the only planet less dense than water (0.7 gm/cc, i.e. it would float). Saturn's hazy yellow hue is marked by broad atmospheric banding similar to, but fainter than, that found on Jupiter.

One of the more obvious features is Saturn's ring system. Inclined at 27 degrees, the rings can be seen at various angles during Saturn's year. The last plane crossing was in May of 1995.

The result is that Saturn's atmosphere has more haze and its features (turbulence, cyclones, etc.) are blurred and hard to see plus the colors are muted into a general yellowish hue.

The wind blows at high speeds on Saturn due to more energy emitted from its core as compared to Jupiter (see below). Near the equator, it reaches velocities of 1,100 miles an hour. The wind blows mostly in an easterly direction. The strongest winds are found near the equator and velocity falls off uniformly at higher latitudes. At latitudes greater than 35 degrees, winds alternate east and west as latitude increases.

This movie, taken by the Hubble Space Telescope, shows a rare storm that appears as a white arrowhead-shaped feature near the planet's equator. The storm is generated by an upwelling of warmer air, similar to a terrestrial thunderhead. The east-west extent of this storm is equal to the diameter of the Earth (about 12,700 kilometers). The Hubble images are sharp enough to reveal that Saturn's prevailing winds shape a dark "wedge" that eats into the western (left) side of the bright central cloud.

The answer to this dilemma lies in the missing helium in Saturn's atmosphere. Most of the Jovian worlds have what is called primordial abundances; 90% hydrogen, 9% helium and traces of everything else. This is the same abundance of elements that makes up the whole Universe. Notice that the inner worlds are very different in abundances due to the changes from being too close to the Sun and too warm (they evolved into their current states). But the Jovian worlds have the same composition now as when they formed. But Saturn is deficient in helium. Its composition is 94% hydrogen and 6% helium, some helium is missing from the atmosphere.

The process was as follows: